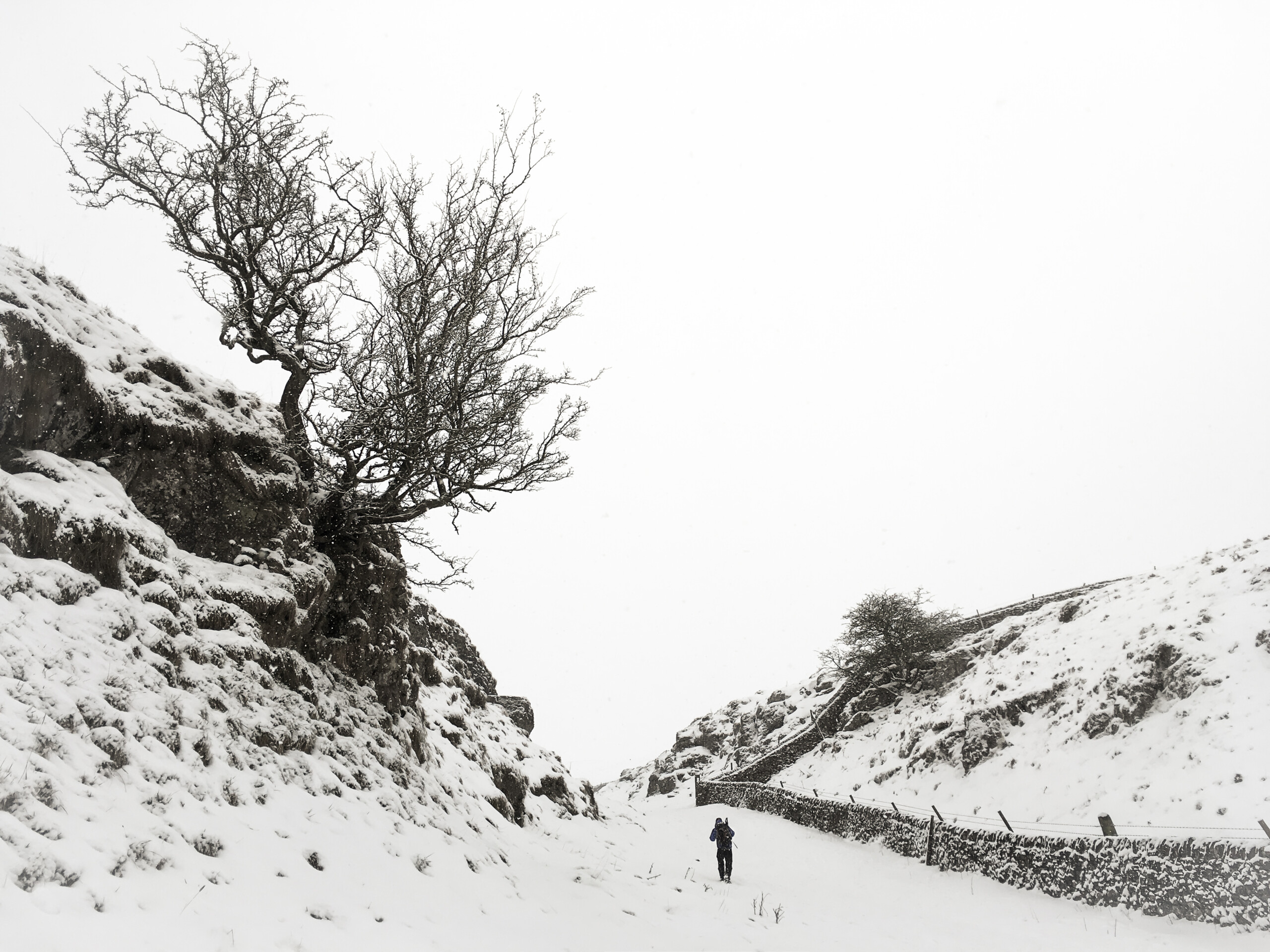 My walk up Mam Tor – Derbyshire, The Peak District

Last Sunday I took out my new Columbia Titanium Outdry hard-shell jacket and a few other new bits of new kit to push them to their limits in the Peak District. As some of you may already know it wasn’t the nicest of days… But I believe it’s important not to get held down and stuck in the city lifestyle, I always try to make a point of getting out even just for short walks wherever possible. That day out icy winds and gusts of around 37mph on top of Mam Tor & Back Tor, 3°C could have quite easily felt around -3. That along with persistent rain from around 13:00 made it pretty tough going.

We arrived at Hope train station at 10:05 ready to take a new route onto The Great Ridge in Derbyshire. The pathway we’d plotted started directly from the station with a 1.8km walk across town to the first public footpath just off Edale Road. As you can see below the circular route takes you through some pretty easy-going lowland farms eastward towards Castleton… 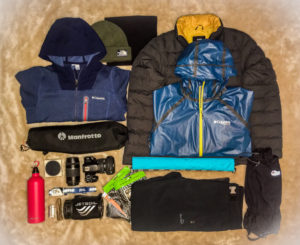 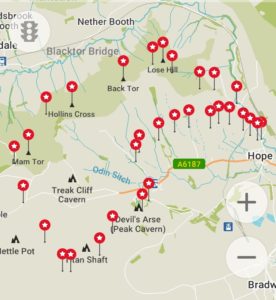 No problems so far, I’d started off with just my NorthFace down-jacket accompanied by a thin hooded Columbia fleece and a basic thermal base layer top, these along with my new Peter Storm softshell trousers made it a very warm and cosy start whilst the morning snow fell around us with little wind. For those of you who aren’t too clued up on outdoor product terms or technologies I’ll try to keep the lingo as simplified as possible throughout my blog entries or elaborate on certain topics as we move on.

We continued on south through Castleton towards the start of Cave Dale (S33 8WS). As the snow came down water was now building up on my shoulders to the extent that it had the potential to start to damage my jacket, I decided it was time to throw my shell over the top before we moved on past Peveril Castle (on the right) upwards following the footpath through the steeped valley towards Titan Shaft. (As a heads up for those of you who don’t already know goose-down fill jackets often have a durable water repellent (DWR) coating which enables the product to repel water, this is usually protection enough against light showers but once penetrated can allow water through into the filled baffles which will deteriorate the down reducing its bulk and warmth, continued abuse can permanently ruin your product). Here we took shelter from the wind behind a dry stone wall and ate dinner in the form of Wayfayrer food pouches cooked using my Jetboil Flash, these meals are on the top of my packing list when planning a trip in the hills and are really easy to cook using the boil in the bag method; simply boil some water, throw your food bag inside and minutes later you’re good to go and can eat directly from the bag. 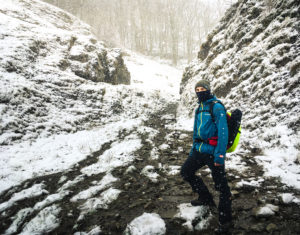 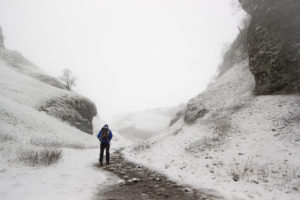 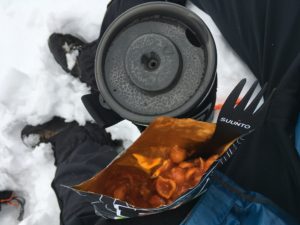 Moving on up towards the road crossing of Winnats Pass (a common yet small car parking spot used to reach Mam Tor) we encountered several wide eyed hikers kitted out with thick coats and well-trodden winter boots ready for the weather which had now become cold with strong winds. At this point the ground had become thick with ice and sharp hail cut into us from the right, it became very clear our walk was about to take a turn for the worse as we pushed on up along the back steps towards the summit of Mam Tor.

Visibility up top was next to nothing and I’d decided attempting a photograph at the summit was definitely not worth me taking my hands out from my Gortex Salomon gloves (which I was so glad to have taken!). The only benefit of the hail and freezing winds, which were burning every bare part of my face, was that it’d also detoured a good few people from following the normally busy walk route, and so we had very little company along the ridge past Hollins Cross & Back Tor over towards Lose Hill which sits at 481m. Here 2ft of snow and thick cloud made it very difficult to plot our route though were lucky enough to be passed by a fell runner dressed in shorts and t-shirt! He didn’t stop to talk but simply gave us a gesturing nod and bounced past us over a small fence stile we hadn’t spotted to the left …We decided to add him to the list of champions we’d seen that day, those of which also included a bulldog barely tall enough to keep his head out of the snow and a very obstinate looking donkey. 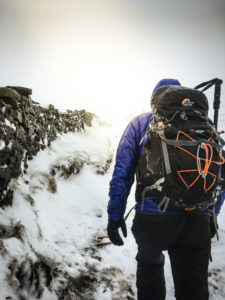 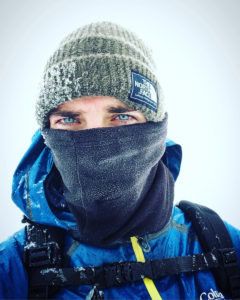 My kit was now taking the full brunt of English winter weather, and as we started down from the higher peaks it’d had enough. The first to go was my trousers, which to be honest I was a little surprised had kept me warm and dry for four hours of  rain. Persistent side wind had blown so much water into the right side of my legs it had began to soak me and water started to run through my pant leg down into my boot. That being said I think these are a great pair of pants for the price (currently valued around £35 from Blacks) I couldn’t complain, they offer complete wind protection, multiple large pockets for storage and a warm and comfortable next-to-skin micro fleece lining (for more information find my full product review). It goes without saying that the correct gear can really make the difference between enjoying a day on the hill or not… My jacket was next to go, although I’m pretty sure that was down to me neglecting to use my hood (an amateur mistake on reflection). Water eventually crept in around my neck and ran across my torso into the inner storm flap behind the zip which essentially just channeled the freezing cold water right towards my best bits… Not what you want on a cold winter day. (Again for further information on my Columbia Outdry jacket check out the full review).

Although the humour continued I think moral had dropped a little as we wandered on down the walkway back towards Edale Road, I think ‘cold and wet’ would probably be an understatement, only jokes and the talk of a nice pint and hot soup sat by the log fire at The Old Hall Hotel kept us going. At this point I noticed Ryan’s backpack, which to my amusement, he’d left uncovered and was now drenched and had literally frozen solid along with all the zip strings on our clothing and both of our hats, needless to say we couldn’t wait for the warmth of the pub! 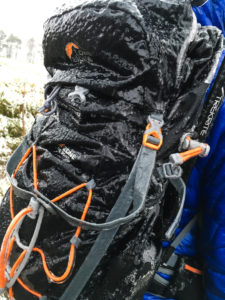 The last stretch of the walk is an easy one, it takes you back onto the pathway we’d started with near Mill Farm. Unfortunately for us after hours of rain this was now heavily water-logged and we pretty much gave up on trying to avoid the puddles and mud, my advice for anyone else who values their feet would be to take the higher walkway which joins onto Lose Hill Lane further up the road.

Fifteen minutes later we arrived at the pub, hot soup and hamburgers in hand with a refreshing pint of pale ale next to the fire (and literally our whole kit draped over the radiators) …A day well spent, and one I’ll definitely have to do again in better conditions! 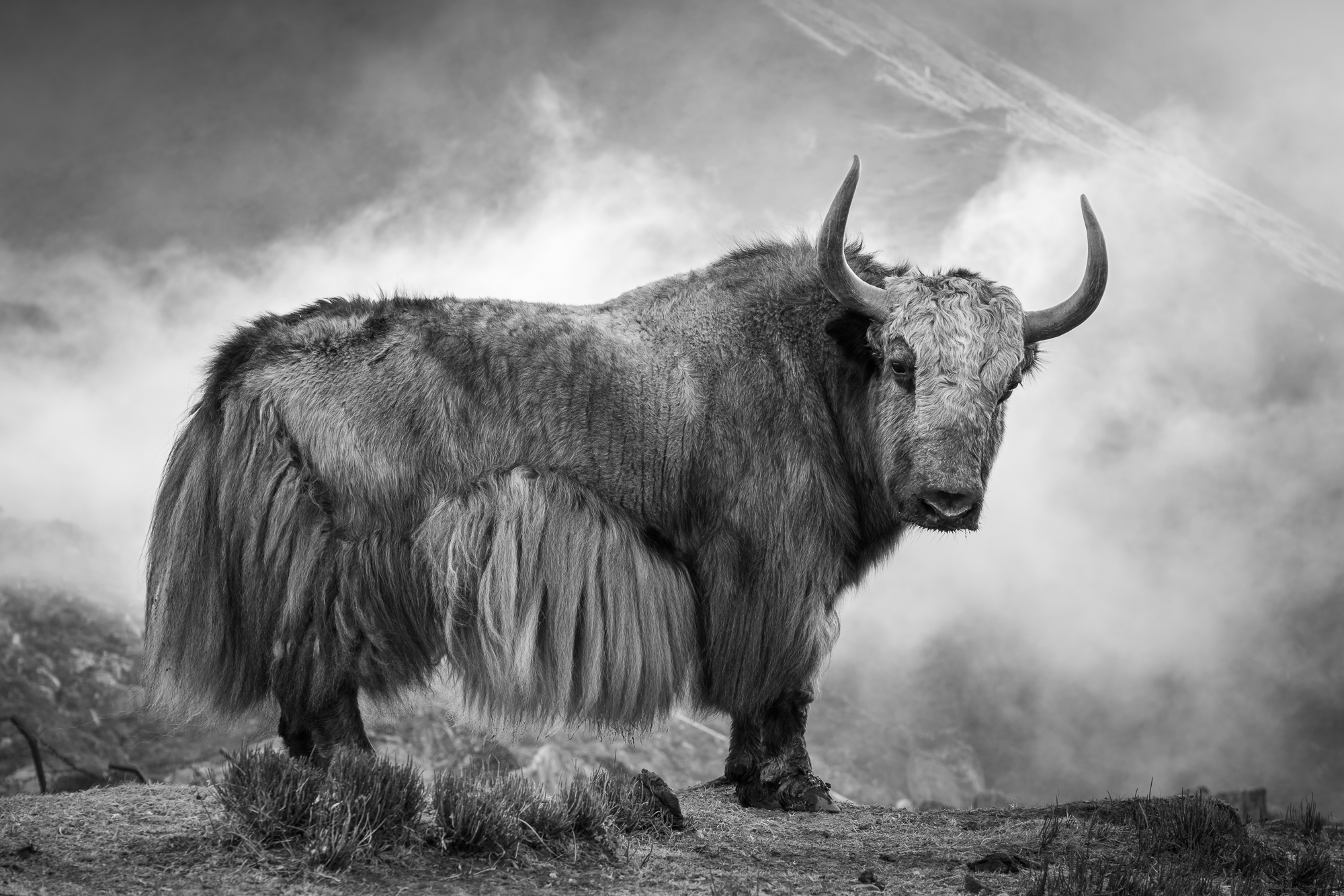 Nepal in Black & White - Tales of Langtang - Fine print collection
These photographs tell the tale behind the scenes of the expedition, they share the essence of the unique people who call these mountains their home, they depict the purity and hardships of life at altitude and highlight the true spirit of the Himalayas through my own eyes. 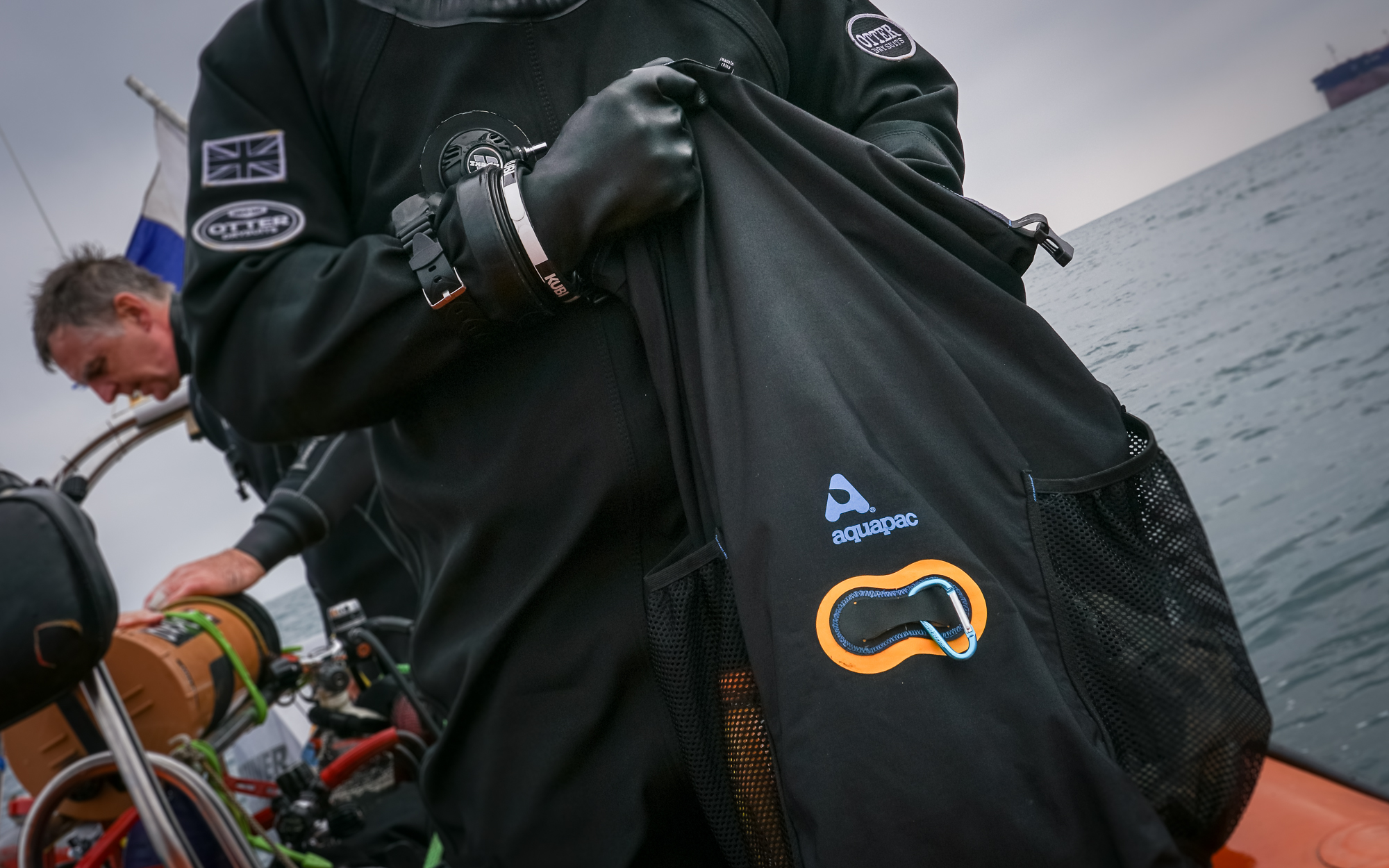 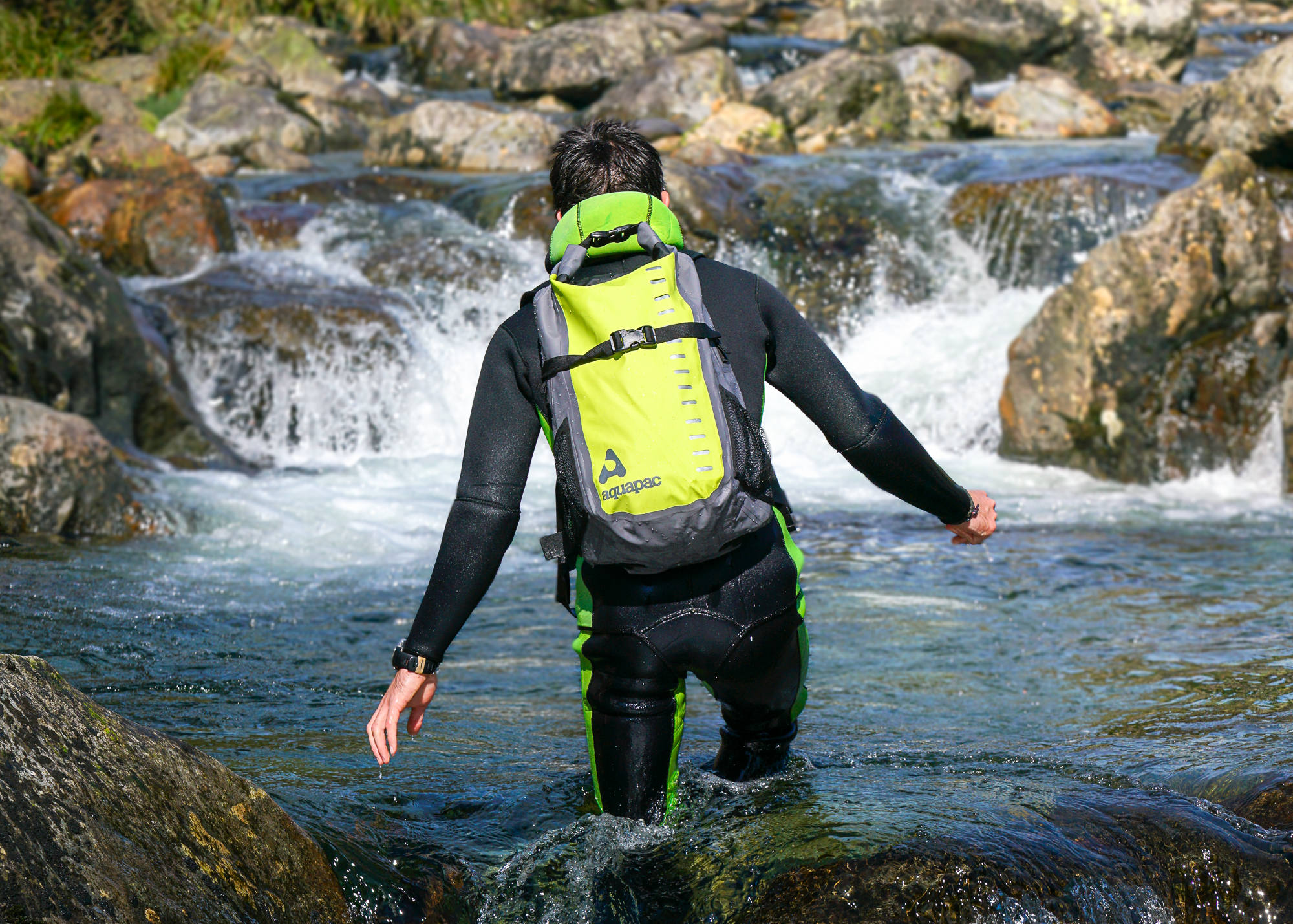